John Wimber began exploring Christianity in 1962 after the near breakdown of his marriage, while working as an up and coming musician, later to be involved with the popular music group ‘The Righteous Brothers.’

John and his wife, Carol, soon remarried in a Catholic church – Carol had been raised as a Catholic, and their original marriage in the Baptist church wasn’t recognised by the Catholics, with whom they had begun to hang around !

Together they lived in Yorba Linda, California, which was at that time was a small town surrounded by orange groves. Among its population of just 5,000 people there were three churches: Baptist, Catholic and Quaker. After a short spell worshipping with their catholic friends at they headed towards the Quaker church in 1963.

John loved the bible study there, but struggled with church services. He had numerous questions which he wasn’t afraid of asking, and did so on a frequent basis! These inexhaustible questions covered anything from baptism, to the Trinity to the death and resurrection of Jesus. John had an insatiable appetite for answers and would persist in seeking them in order to understand what he was signing up for.

During this time John and Carol kept exploring the bible with the assistance of their good friend ‘Gunner’, a local welder in Yorba Linda. They were often puzzled as to how they could ‘join this thing’, but Gunner waited until they were ready and the time was right, before praying with them and introducing them to Jesus. Carol Wimber wrote: “It was right there, kneeling on the floor and sobbing . . . that John determined how he would spend the rest of his life – as a fool for Christ.”

In 1963, God began speaking to John about his career, which at this stage was as a highly successful and well-respected musician. After reading the parable of the ‘Pearl of Great Price’ and seeking counsel from those around him, John gave up his musical career and took a job labouring on a low wage.

John often taught about belonging to Jesus, saying: I’m spare change in his pocket, he can spend me any way he wants. This was a principle that he practiced first and foremost, before ever he taught it.

In John’s first decade as a Christian he led hundreds of people to Christ. By 1970 he was leading 11 bible studies that involved more than 500 people in the local comunity.

John Mumford, the National Director of the Vineyard in the UK & Ireland, said of John Wimber: “What you saw of John in public was exactly what you got in private. There was no ‘side’ to him. There was no sudden change once he came off the platform, whether he was praying for people, or joining in an informal conversation or eating supper. What you saw really was what you got.”

In 1970 John Wimber was asked to join the ministerial staff at the Quaker church in Yorba Linda, having been a part of the church for the last four years. His title varied, but included ‘Assistant Pastor’ and ‘Co- Pastor.’ John never could bear titles !

He was, in part, dissatisfied during this time although there was fruit in his ministry. By 1974 John had enrolled in Peter Wagner’s Doctor of Ministry course in Church Growth at Fuller Theological Seminary. This opened him up to the wider church, whose people he always loved meeting. One of his popular maxims was ‘my brother is never my enemy,’ for he had come to love all parts of the wider church, even those with whom he didn’t necessarily agree. John was always an advocate of church unity and spent seasons of his life hanging out with different denominations and movements. He would insist that where the name of Jesus was honoured be it among snake-handling churches or those worshipping with their candles and their incense, all who loved Jesus there were his brothers and sisters.

It was at this time, in 1975, that Peter Wagner offered John a job in establishing the Charles E. Fuller Institute of Evangelism and Church Growth. John took this position and subsequently resigned from his role at the Friends (Quaker) Church in Yorba Linda.

During this season, John travelled widely and experienced many different movements and denominations. The Holy Spirit increasingly came to the fore- front of his life during this time. After one meeting John, while sobbing, phoned his wife Carol and said: ‘If God ever has me pastor a church again, I pray we will devote ourselves to the poor’. This had a foundational effect on the Vineyard and its philosophy concerning ministry to the poor.

Despite pivotal moments like this, John would often say how spiritually dull he felt during this time. But God continued to speak to him on several occasions, in preparation for the next stage of his ministry. One famous story told how God spoke to John clearly by saying: ‘I’ve seen your ministry, now I’m going to show you mine.’ Later in 1976 John received a word from a woman who approached him in tears saying: “God wants to know, ‘are you going to use your authority or not?’”

As the Holy Spirit continued to move, Carol was involved in a small group named ‘Afterglow’ with her friends from the Quaker church. As they focussed their attention on the Holy Spirit, and enjoying His presence, God began to move and stories spread through the town of signs and wonders happening in this group. The Quaker church sent one of their leaders to investigate and even shut down the group; however, he visited twice and returned to the elders saying: ‘I can’t do it [shut the group down]. It’s the Lord.’

Things came to a head, and John spent time with the church elders sharing that he felt this was a ‘genuine outpouring of the Holy Spirit…if this is God – and I believe it is – we are going to let him do whatever he wants to do with us.’

As these experiences were counter to the direction in which this Quaker church was moving at the time John and Carol, with the generous blessing of the Quakers were encouraged to resign their membership, and together with about sixty other people connected with Don McClure and became the Yorba Linda Calvary Chapel in May 1977.

As John and Carol began praying for the sick they began to see things happening – people getting well – but they didn’t fully understand it. Until one day John was poring over the bible trying to find answers when he suddenly relaised: ‘We teach the word, then God does the work. Like tell and show, or show and tell! I think I get it!’ After this point healing became a larger and more prominent part of their ministry.

Previously John and Carol had become firm friends with Kenn and Joanie Gullikson through the Calvary Chapel pastors’ retreats. Kenn and Joanie had often moved location and had planted several churches, but they returned to Los Angeles and started a church, naming it ‘Vineyard’, based on Isaiah 27:2-3 ‘Sing about a fruitful vineyard: I, the Lord, watch over it; I water it continually. I guard it day and night.’ And so the Gulliksons began church planting and by the time they first met John and Carol had already established six or seven ‘Vineyard’ churches.

Alongside the early stages of Vineyard church planting there was a remarkable outpouring of the Holy Spirit. Carol Wimber records in her own book ‘The Way It Was’, that in 1980 and 1981 one of the journals kept of their ministry trips ‘reads like the Book of Acts…praying and worshipping and teaching and healing. Transferring the ministry of the gifts of the Spirit into the hands of the church.’

This sort of activity didn’t sit comfortably with the Calvary leaders, and they said to John ‘When anyone goes to a Calvary Chapel, they know what to expect. But the Yorba Linda church is different.’ They advised John to change their name to ‘Vineyard’, blessed them and prayed ‘a short dismissal prayer.’ Despite the name change the direction of the church remained the same.

John and Carol checked with Kenn that he was happy for them to use the name ‘Vineyard’, as they had no intention of ever changing their name again. It seemed good to them all, as well as to the Holy Spirit! And thus this agreement saw the birth of the Anaheim Vineyard Christian Fellowship. It was on Mother’s Day, 1982, that John & Carol Wimber (and their church) officially took to themselves the name Vineyard.

From this point the ministry exploded and a subsequent trip to the UK at the invitation of Anglicans and Baptists, saw John and Carol, with a team of young people from the Anaheim Vineyard, minister at St Andrews, Chorleywood and St Michael’s York. Both David Pytches and David Watson welcomed Wimber ‘s ministry and received his teams with great excitement. They were really the first to introduce John and Carol to the church in the United Kingdom.

St Andrew’s went on to play a pivotal part in the development of the Vineyard in the UK not least because of the Pytches’ close friendship with John and Carol, their leadership of the New Wine network and the Wimbers’ encouragement of New Wine and its summer festivals.

Back in the USA John was invited to run an experimental course for Fuller Seminary, which began in January 1982, it was entitled ‘MC510 – Missions Class 510: Signs and Wonders and Church Growth’. The classes followed the ‘show and tell’ format that John had found so effective and they continued until 1985.

MC510 was a trigger for many Vineyard conferences and word of all that happened through this course spread like wildfire to the church worldwide. John’s heart was that those attending would learn to be doers as well as hearers of the word, ‘to do the stuff as it was in the book. ‘ He would read John 14:12 with fresh eyes: ‘I tell you the truth, anyone who has faith in me will do “the stuff” that I have been doing. He will do even greater “stuff” than this because I am going to the Father.’ Doin’ the Stuff ‘ was just one of the pithy epithets that distinguished his teaching. At capturing such profound truths in such simple statements he was little less than a genius.

John had a firm belief that ‘everybody gets to play’ by which he was keen to deflect attention away from the person with the microphone, and taught that everyone gets to ‘do the stuff’ not just the person on the stage.

There developed an increasing need during this time to clarify the Vineyard’s theological position on a number of topics, so John wrote several ‘Position Papers’. He also wrote the successful books ‘Power Healing’ and ‘Power Evangelism’, which contained much of the material from MC510, encapsulate much of his original thinking and continue to be so popular to this day.

In 1986 John’s health began to deteriorate and he had his first heart attack in June of this year. He used to say of his own physique and its increasing health problems “It’s not so much the model as the mileage!” In March 1993 John was diagnosed with an inoperable tumour, treatable only by radiation. Despite his ill health he continued to grow Vineyard Music, and the Vineyard International Movement as well as Vineyard Churches.

John’s health continued to falter and he was finally ‘promoted to glory’ on 17th November 1997.

As a movement we are thankful for all that God did through John & Carol Wimber, and are conscious that as we move forward we always need to remember what came before. We are grateful for those who have recorded John’s teachings, so that the wider church can continue to benefit from his wisdom and his extraordinary ability to communicate Kingdom values. 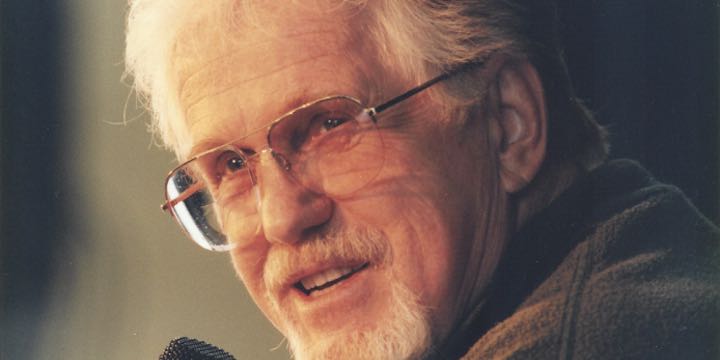 John Wimber: The Way it Was. Written by Carol Wimber.

Living the Future: The Kingdom of God and the Holy Spirit in the Vineyard Movement. Written by Douglas Erickson